Many people suffer from color blindness their whole lives without ever noticing it. But color-blind glasses may help them see a more colorful world. The real man cried. 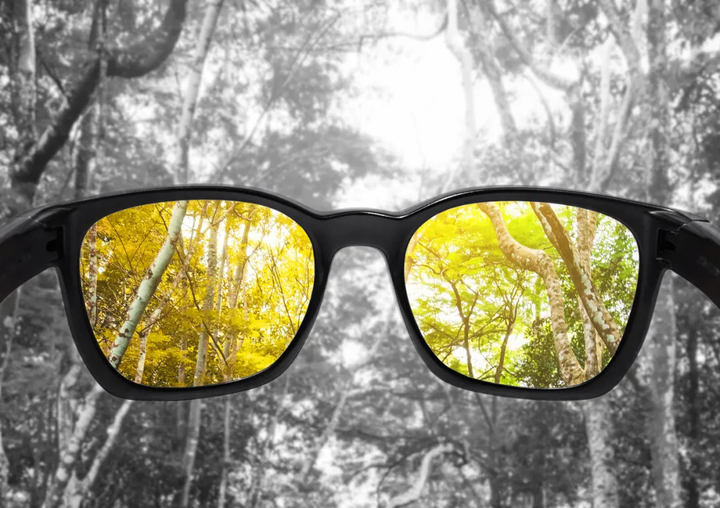 If you are asked which of the five senses is most important, most people will think first of sight. As the saying goes “seeing is believing”, vision establishes our perception of the world in the most direct way. And color discrimination is one of the core abilities.

In movies and TV shows, we often see how people with “color blindness” encounter many difficulties in living in black and white. They can’t recognize the kinds of food, look good or bad, can’t recognize various signals and ICONS, and can’t match their clothes properly

Did you know that on average, one in 12 men and one in 200 women are “color blind”, yet many people go through their lives without realizing it? Is that possible? And what magical technology can help them see the colorful world?

The light signals are arranged in different ratios and, like a palette, create a colorful world in our minds.

Three types of cones in the retina of the eye, codenamed S, M and L, sense different wavelengths of light entering the eye.

Red-green color blindness is usually the most common in the population. Because the light-sensitive pigment genes responsible for sensing both colors are located on the X chromosome, red-green color blindness is more likely to be passed on to offspring, and is more common in men than women. Women have two X chromosomes, and if one of them is affected, the other can still function normally (in this case, a woman’s ability to see colours is not affected, but the gene in question can be passed on to her offspring).

Men, by contrast, have only one X chromosome, so there is no back-up and color discrimination is inevitably affected.

The actual rate of color blindness is much higher than we think, with an average ratio of 1 in 12 males and 1 in 200 females. It may surprise you: look around, color blindness doesn’t seem to be common.

In fact, although it is called “blind”, the real world only black and white color “total color blindness” is very rare, only about one in 100,000 probability. The vast majority of patients actually have “abnormal color vision,” and the unhealthy may be a particular type of cone, with varying degrees. Many patients do not realize that they are color blind all their lives, because their color discrimination ability still exists, but compared with normal people, the degree of saturation and brightness of some colors become weaker.

A common condition is a shift in the wavelength recognition range of cones. The red and green cones, for example, have highly homologous light-pigment genes and are located next to each other, so they often recombine, causing genes to fuse or hybridize, resulting in abnormal pigments.

As a result, many patients with color blindness have a weak ability to distinguish red and green light. A verdant forest may appear to them as a dull brown tint drifting towards the red zone. However, they have been used to it since childhood, thinking that it is the original color of the forest. Sometimes, even if pointed out, they will also think that the subjective understanding of color is different, ignoring the physiological reasons.

In addition to damage to cones, other diseases can also affect color perception in the eye, such as “cataracts” in the elderly. People with cataracts often have trouble seeing blues and purples because the cloudy lens can’t see through short wavelengths of light, while people with cataracts can see reds and greens better.

The color-blind glasses that make so many fierce men cry

Amazingly, for people with color blindness, a special pair of glasses can change their lives. Whether it is the first time you hear your child’s call through cochlear implant, or the first time you put on magic glasses to see the vibrant vegetation or the red lips of a lover, when the senses covered by disease finally connect with the real world, no matter how calm and strong you are, you will inevitably be moved to tears by the natural richness of life.

As mentioned above, what colour we end up seeing depends on the proportion of red, green and blue light signals that are processed by the cones and sent to the brain. In color-blind patients, the range of target wavelengths for which cones are responsible often shifts.

In one case, the two types of cones that distinguish red and green light don’t work properly and get mixed up, so that the brain can’t tell the difference between red and green, and objects that should be clearly red and green all turn a dull brown

Color-blind glasses look the same as regular sunglasses and are essentially a filter. It blocks the passage of certain wavelengths of light, such as the part of the spectrum where red and green light are adjacent to each other in wavelengths that are often wrongly overlapped by the recognition of the disordered cones.

At the same time, the lenses allow light with a wide range of wavelengths, which are easier for the cones to pick up. That way, with the help of the glasses, the correct proportion of the two color signals sent to the brain increases, allowing the patient to distinguish a richer variety of colors.

As you may also be aware, color-blind glasses reduce the amount of light they pass through, so they are not suitable for use in dim lighting or for people with cataracts or severe vision loss. Color-blind glasses that can be used at night and better distinguish between other wavelets-are being developed, but they are generally expensive. What if you want to spend a comfortable night at home watching a TV show? Wearing sunglasses seems weird, too.

Fortunately, there are other technologies to help.

In 2014, the University of East Anglia in the UK developed and marketed a special set-top box that allows color-blind patients to watch TV in “full colour” without having to wear any equipment.
A mathematical model built into the box analyzes the TV frame by frame, identifying areas where color-blind people might find it difficult to distinguish, and then digitally amplifies the output. A person with normal color vision is barely aware of any changes in the picture, while a color-blind person sitting next to him can have a much sharper visual experience.

The technology, originally used only for still images, has been widely welcomed in television images, especially by older people who often stay at home and people with limited mobility. Now, through partnerships with TV manufacturers, the technology has been built into a one-click option from the screen menu, making the care of technology within reach.

However, external devices are not a cure for the symptoms, and the effect on cone (number or function) loss of color blindness is very weak. For this reason, the medical community has been developing a radical cure for color blindness. In the past ten years, gene therapy with virus as carrier has made great progress.

In May 2020, a study by the University of Tubingen in Germany found that about a third of people with colorblindness had a defect in a gene called CNGA3 in their cones.

Taking advantage of the virus’s ease of entry into human cells, the researchers inserted the correct gene fragments into a harmless adeno-associated virus (AAV) vector and injected it into the retina, allowing the therapeutic virus to contact the diseased cones. In about a few weeks, these cells can produce healthy light-sensitive pigments and repair color discrimination with the right gene fragments.

So far, nine adult patients aged 24 to 59 years have responded well to the treatment. But the new problem is that these people are born with a condition in which the brain has never been able to perceive normal colors, so they need to train the brain to perceive the real world from the retina’s newly acquired color signals. Younger patients have more potential, but new studies in children have been slow to try because of safety concerns.

In fact, the same principle of technology to treat eye diseases has long been known. Luxturna, developed by Roche’s Spark Therapeutics, is an AAV carrier drug that is injected under the retina to treat the vision loss inherited retinal dystrophy caused by a genetic mutation. The drug was released in 2017.

We are delighted to see the power of medicine, physics, materials science, mathematics and many other disciplines coming together to create one miracle after another in order to make patients reperceive this colorful world. What shines into our eyes together with the beauty of the world is the deep concern of science and technology for human beings.

For children under the age of 12, special child car seats can be used for protection. For children over 12 years old, […]